English Literature Collection are located and shelved on the second floor in the library building under the "800" number ranges. Every book has a unique call number on its cover and available on the library catalog.

This is a sample of printed books from the library catalog and available in the library building:

Writer of the Month 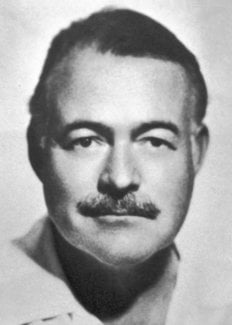 Ernest Hemingway (1899-1961), born in Oak Park, Illinois, started his career as a writer in a newspaper office in Kansas City at the age of seventeen. After the United States entered the First World War, he joined a volunteer ambulance unit in the Italian army.

The Nobel Prize in Literature 1954 was awarded to Ernest Miller Hemingway "for his mastery of the art of narrative, most recently demonstrated in The Old Man and the Sea, and for the influence that he has exerted on contemporary style."